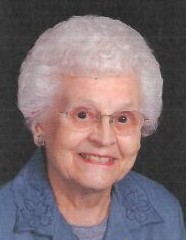 Wilma Bruns, 97, of Sunset Home in Quincy, formerly of Camp Point, died at 1:30 p.m. Sunday, January 3, 2021, at the home.
Born May 20, 1923, in rural Columbus, Il, Wilma was the daughter of Arthur and Esther McFarland Richards.  She married Dale Bruns on May 14, 1942, at the Barry Methodist Church parsonage in Barry, IL.  Dale preceded her in death on February 3, 2013.  They were married for 70 years.
Wilma graduated from Maplewood High School in Camp Point, IL and was a member of the Camp Point United Methodist Church where she was active in the ladies’ group.  She was a 40-year member of the Rebekah Lodge where she served as a musician and played the piano at the Camp Point nursing home every week for 25 years.  She was a 4-H leader and a Den Mother for Cub Scouts, was a member of the Home and Community Education organization for 50 years, and served on the Camp Point Library board for many years.
Wilma was a homemaker at heart who loved baking and cooking for her children and grandchildren especially making sure that each one had their favorite cake or pie for their birthdays.
Survivors include a daughter, Marlene (Joe) Churchill of Quincy; a son, Larry (Sue) Bruns of Camp Point; nine grandchildren, Brian Craig of Golden, Brenda (Casey) Hill of Quincy, Adam (Tammy) Bruns of Quincy, Nathan (Jackie) Bruns of Quincy, Emily Bruns of Winona, MN, Brody Bruns of Dublin, OH, and Rev. Mr. Corey D Bruns of Owensboro KY, Andrea (Ken) Knapp of St Louis, MO and Joe (Kelly) Mays of Quincy, 3 step-grandchildren; 17 great-grandchildren; one sister-in-law, Johanna Bruns of Winchester, IL, and several nieces and nephews.
She was preceded in death by her parents and one brother, Warren (Doris) Richards.
Due to the Covid restrictions, a private immediate family burial will be held at Evergreen Cemetery in Camp Point with the Rev. Mr. Corey D Bruns officiating.
Memorial contributions may be made to Sunset Home and Camp Point Methodist Church.
Online condolences may be left at www.hamiltonfuneralhomes.net.
The Lummis Hamilton Funeral Home is handling the arrangements.

To order memorial trees or send flowers to the family in memory of Wilma Bruns, please visit our flower store.
Send a Sympathy Card