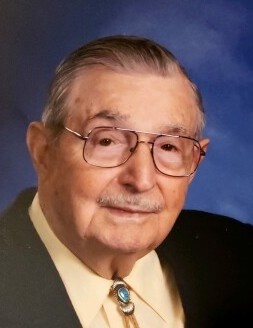 No services to be held


Ralph L. Taylor, 96, of the Timberpoint Healthcare Center in Camp Point, died at 7:00 a.m. Friday, December 4, 2020, at the home.
Born October 5, 1924, in Camp Point, Ralph was a son of Clarence and Ruby Wheeler Taylor. He married Erma L. Niekamp on August 20, 1955, in St. Paul United Church of Christ in Fowler, IL. by Rev. Donald S. Schmidt. She survives.
Ralph was a graduate of Maplewood High School and attended Gem City Business College. He was a lifelong member of the Camp Point United Methodist Church. He worked with the family business Taylor Grain and Fuel Supply started in Camp Point in 1934. The business later became a wholesale distributor of livestock equipment and the name was changed to Taylor Farm Supply selling to dealers and elevators.
He and his wife always enjoyed the vacation times and retiring years traveling by car and some bus trips to the western states Rocky Mountains, Jackson Hole, Estes Park, Colorado Springs, Yellowstone National Park, and a couple of trips by motorhome with longtime friends, Ray and Wilma Yoder, to California. They also enjoyed many business trips to Goshen, IN. for livestock equipment.
Surviving in addition to his wife is a nephew, William B. (Cherie) Taylor, Green Cove, FL.; and his great-niece, Debbie (Sean) Dukes, Orange Park, FL.
He was preceded in death by his parents and his brother, Ray Taylor.
Mr. Taylor was cremated. There will be no services.
Memorial contributions may be made to Camp Point United Methodist Church or Chaddock.
Online condolences may be left at www.hamiltonfuneralhomes.net.
The Lummis Hamilton Funeral Home in Camp Point is handling the arrangements.

To order memorial trees or send flowers to the family in memory of Ralph Taylor, please visit our flower store.

No services to be held