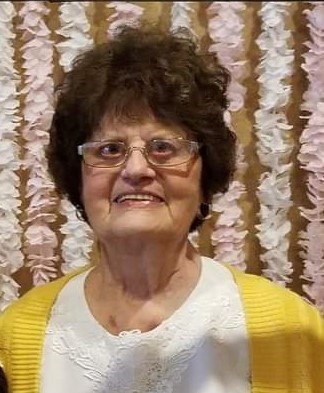 Julia Claire (Ferguson, Larson) Randall, 87, of Augusta, Illinois, passed at 7:17 pm on Tuesday June 28, 2022 at Golden Good Shepherds Home in Golden, Illinois.  She fought a brave battle against Parkinson’s Disease for approximately five years.
She was born on March 25, 1935, in Ft. Madison, Iowa, the daughter of Merrill A. and Hazel R. (Schneider) Ferguson. On January 1, 1955, she married Carl Larson. They later divorced and he preceded her in death on September 7, 2004.  On August 13, 1966, she married Ronald Randall, her husband until her death.
Survivors include her sons: Michael (Laurie) Larson of Bozeman, Montana, Mark (Martha) Larson of Macomb, Illinois, daughter, Andrea Randall of Augusta, Illinois, and stepson, Gregg (Ann) Randall of Blandinsville, IL; 10 grandchildren and five great granddaughters. Surviving sisters include Martha (Woody) Murphy of Iowa City, Iowa, Harriet Ferguson of Owls Head, Maine, and one brother, John (Nancy) Ferguson of Niota, Illinois. She was preceded in death by her sisters Jayne Engelbrecht, Mary Schneider, Kathryn Greenslaugh-Schmitz, and brother, Howard Ferguson.
Julia was a 1953 graduate and Homecoming Queen of Nauvoo High School.She attended secretarial school at Carthage College and worked in a variety of jobs including assistant to the Dean at Carthage College and Robert Morris College in Carthage. She continued her career in 1972 at the State Bank of Augusta and Bowen State Bank until retirement.

Her years of travel with Ron took her motorcycling to Colorado, Appalachia, New Orleans, the Ozarks, and many local rides.  She also treasured her 20+ visits to Montana to see her son, Michael and family, accompanied by her sister Harriet.  After her retirement she enjoyed coffee hour two mornings a week with five friends and their many shopping sprees.

Julia was all about family and friends. Nothing pleased her more than being surrounded by the people she loved. Julia possessed an amazing ability to make others feel good with her shining personality, beautiful smile, and positive attitude.  Her life-long focus was to assist people be it family, friends, and the public.  She was self-reliant and managed many obstacles during her life on earth leaving many with her amazing grace.

A Celebration of Life service will be held at 11:00 am Tuesday July 5, 2022 at the Living Faith United Methodist Church in Bowen, Illinois with Pastor Sheri Renner officiating. Burial will be in Bowen cemetery. Family will meet friends and relatives from 9:00 am until the time of services at the church. In lieu of flowers, memorial donations may be made to the Living Faith United Methodist Church or Southeastern Food Pantry in Bowen, Illinois.

The Hamilton Funeral Home in Augusta, Illinois is handling arrangements.

To order memorial trees or send flowers to the family in memory of Julia Randall, please visit our flower store.