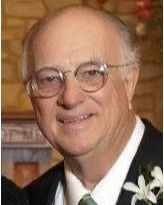 John Conrad Wilkey was born November 6,1935 in Quincy, IL, the son of Keith L. and Ruth Meier Wilkey. He died December 6, 2022. He graduated from Camp Point High School, Illinois College, Jacksonville, IL with a Bachelor of Arts, Garrett Biblical Institute with a Master of Divinity, and University of Dubuque Theological Seminary with a Doctor of Ministry.
He married Eileen Deloris Daggett on July 10, 1955. Eileen passed away on March 2, 2003.  They were parents of five children: John Wesley (Sheryl), Brian Ross (Barbara), Brinton Geoffrey (Susan), Jael Ellen (Mark), and Jared Asbury (Yu Jie). Also surviving are seventeen grandchildren Heather Coddington, Ariana Gladfelter, Christian, Eva Morton, and Ian; Greg, Jeff, Andrew, and Steven Wilkey; Megan, Brinton Jr., and Allison Wilkey; Matthew, Michael, and Katie Simpkins; Molly and Keith Wilkey. Also surviving are sixteen great grandchildren with one on the way. John is also survived by a brother, Larry (Janet) Wilkey, sister Janet Knorr, and sister-in-law, Denise Wilkey.
On April 24, 2004 John married Stephanie Smith-Jarratt of Atlanta, TX. She survives.
John was called to preach in May 1953 and started to preach in the same fall in western IL. John was ordained into the ministry of The Methodist Church, taking Deacon’s orders in 1958, and Elder’s in 1961. He served pastorates at Murrayville, Pontiac, Cuba, Augusta, Pittsfield, and Grace Church in Jacksonville, all in IL. In retirement he served at Laws Chapel in Atlanta, TX. He served the Illinois Great Rivers Annual Conference and its predecessor body, Central Illinois Conference as chair of the Board of Finance and Administration, Board of Ordained Ministry, District Board of Ministry (25 years), and taught in the Jurisdictional License to Preach School for twenty years. John was elected by his peers to serve as a delegate to the North Central Jurisdictional Conference for four quadrennia, and as an alternate delegate to the General Conference. He also taught religion courses at John Wood Community College, MacMurray College, and at Illinois College.
He was an amateur bluegrass musician playing multiple instruments, especially adept with the mandolin. In the 1960s, John and Eileen formed a folk band, The Prairie Ramblers, performing throughout west central Illinois. John and Stephanie worked together as pastor and choir director at Grace church and Law’s Chapel from 1988 and on. Together they performed in many concerts with John playing the mandolin and guitar, and Stephanie playing autoharp and singing. As an outdoorsman, John enjoyed cutting wood with his sons and son-in-law. John was a voracious reader, audiophile, an avid gardener, and a tree farmer.
Funeral services will be held Wednesday, December 14, 2022, at 11:00 a.m. at the Pittsfield United Methodist Church, 222 North Monroe Street, Pittsfield, IL. 62363.
Visitation will be held Wednesday from 9:00 a.m. until 11:00 a.m. at the Pittsfield United Methodist Church.
A graveside service will be held Wednesday at 2:30 p.m. at the Graymount Cemetery in Coatsburg, IL.
Memorials may be made to Preachers Aid Society and Benefit Fund, www.pasbf.org.
Online condolences may be left at www.hamiltonfuneralhomes.net.
The Lummis Hamilton Funeral Home in Camp Point is handling the arrangements.

To order memorial trees or send flowers to the family in memory of John C Wilkey, please visit our flower store.