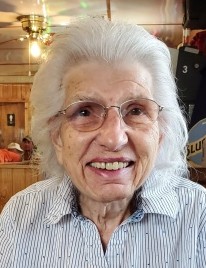 Joan Mixer, 86, of Camp Point, died at 4:45 p.m. Monday, February 22, 2021, at Sunset Home in Quincy.
Born October 9, 1934, in Brown County, Illinois, Joan was a daughter of Alfred and Mildred Fey Hetrick. She married Glenn R. Mixer on November 10, 1954, in Ripley, IL. He preceded her in death on March 16, 1984.
Joan was employed at Adams Electric Cooperative in Camp Point for over 30 years as a secretary. She had served on the Camp Point Library board and was involved with numerous local volunteer groups. Her greatest joy came from the time she spent with her family, especially her grandchildren. Joan was a member of the Ripley Church of God and attended the First Christian Church in Camp Point.
Survivors include her children, Denny Mixer, Spring Hill, TN., and Susan Kauffman (Bob), Douglasville, GA.; her son in law, Larry Brown, Camp Point; her grandchildren, Lindsay Brown (Jason Graham), Karie Johnson (Justin), Kelly Bracco (Adam), Kirby Mixer, Cooper Mixer, Joseph Kauffman, and Christopher Kauffman; and her great-grandchildren, Brianna and Braydon Graham,
She was preceded in death by her parents; her husband; her daughter, Glenna Brown; and her sister, Reva Moore.
Funeral Services will be conducted at 1:00 p.m. Saturday, February 27 at the Lummis-Hamilton Funeral Home. Burial will follow at Evergreen Cemetery, Camp Point, Illinois. Please bring a mask and adhere to social distancing guidelines if you wish to attend.
Visitation will be held Saturday morning from 11:00 a.m. until the time of services at the Lummis-Hamilton Funeral Home in Camp Point. Please bring a mask and adhere to social distancing guidelines if you wish to attend.
Memorial contributions may be made to the Central Mini Relay for Life.
Online condolences may be left at www.hamiltonfuneralhomes.net.

To order memorial trees or send flowers to the family in memory of Joan Mixer, please visit our flower store.
Send a Sympathy Card