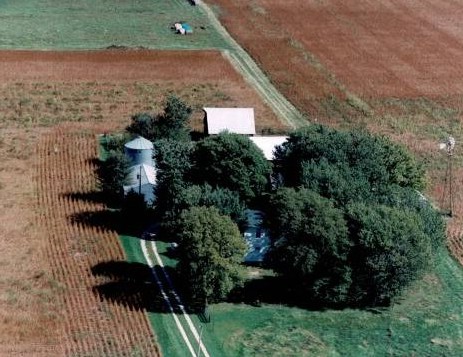 Glen A. Leerhoff, 93, of Mendon, died at 6:22 a.m. Tuesday, January 26, 2021, at Blessing Hospital in Quincy.
Born March 16, 1927, in Golden, Glen was a son of Ehme and Katherine Heinecke Leerhoff. He married Hildegarde Schuster on April 27, 1946. They would have been married 75 years this coming April. She survives.
Glen grew up on the farm in the Golden area and moved to Quincy in the early '50s. He worked at a number of jobs before starting at Oennings Glass Company in 1952. He worked there for 40 years until his retirement in 1992.
As a young man, Glen liked playing baseball. He played in a church league and at family reunions would usually be out in the field playing baseball with his kids. He bowled in a league for many years and was quite the pitch player. Glen and his family belonged to and was active at Our Redeemer Lutheran Church in Quincy and St. Peter's Lutheran Church in Coatsburg. The last few years he attended Trinity Lutheran Church in Golden where he had been baptized, confirmed, and married.
In 1962, Glen and his wife bought a farm south of Big Neck and moved there several years later. In addition to working at Oennings, Glen raised feeder pigs, had a small herd of black Angus, and over the years took over the farming as well. Although Glen sold off his livestock a number of years ago, he was fortunate to be able to continue farming until the end. He was happiest working on his farm and spending time with his family.
Surviving in addition to his wife are two daughters, Susan Kay and John Chenoweth of Table Grove, IL., and JoAnn Cannell and Dan Peters of Quincy. In addition, there are four grandchildren and eight great-grandchildren who survive: Scott Chenoweth of Indianapolis, IN., and his children, Anna, Evan, Noah, and Simon; Sara (Chenoweth) and Ryan Plummer of Industry, IL., and son John Ryan; Daniel Cannell of Mendon, Daron Cannell of Mendon, and his children, Aden, Korbin, and Collin. There are lots of nieces and nephews who also survive as well.
Glen's brothers, Martin, Emery, and Elmer Leerhoff, and his sisters, Pauline Bruns, Anita Lubben, and Sylvina Behrens preceded him in death.
Funeral services will be held Friday afternoon at 2:00 p.m. at the Lummis Hamilton Funeral Home in Camp Point. Burial will follow at Immanuel Lutheran Cemetery in Golden. Please bring a mask and adhere to social distancing guidelines if you wish to attend.
Visitation will be held Friday afternoon from 12:00 p.m. until the time of services at the funeral home. Please bring a mask and adhere to social distancing guidelines if you wish to attend.
Memorials may be made to Trinity Lutheran Church in Golden or the charity of the donor’s choice.

To order memorial trees or send flowers to the family in memory of Glen Leerhoff, please visit our flower store.
Send a Sympathy Card