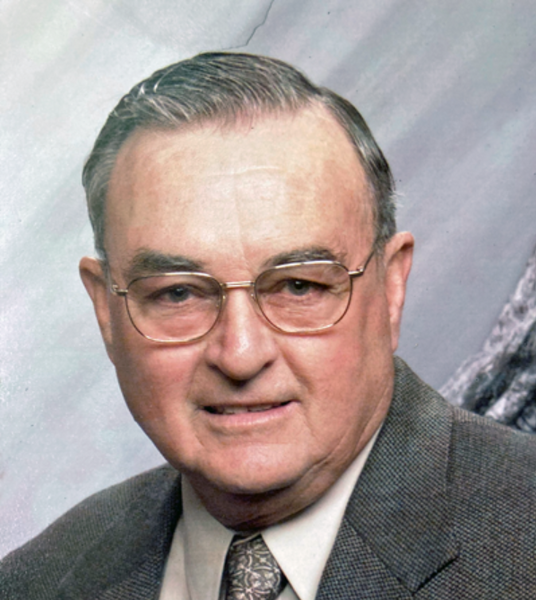 Born August 26, 1930 at home, Gerald “Gene” was the son of Fred C. and Ruth Agans Kearby.  He married Virginia Mae Bilderback on February 4, 1951 at the Presbyterian Church in Augusta.

Gene attended Washington grade school (rural LaPrairie) for 8 years, Rushville High School his freshman year, and graduated from Augusta High School in 1948.  He attended Western Illinois University in Macomb, and transferred to the University of Illinois in Champaign his junior year, graduating with a B.S. degree in Agriculture Education in June 1952.

After his graduation, he and his wife moved to Dunlap, IL where Gene taught agriculture at Dunlap Twp. High School for 3 years.  In May 1955, they moved to rural La Prairie, where he farmed full-time until 1965.  Gene taught in the Schuyler Co. Unit School district from 1965 – 1967.  In 1967, he started a career with Schuyler Co. ASCS and served as the County Executive Director in Rushville until 1979.  Following this, he worked for Illinois State Farm Service Agency (FSA) as the District Director for 11 counties until his retirement in May 2008.

Gene was involved with the Kiwanis, Masonic Lodge where he earned his 32nd degree, Augusta School Board for 4 years, and Schuyler Co. Farm Bureau.

Mr. Kearby was preceded in death by Virginia Mae Kearby, his wife of 69 years, and his parents.

A Funeral Service will be held at 11:00 am Monday January 31, 2022 at the Hamilton Funeral Home in Augusta, IL by Pastor Stacy Tomich. Burial will follow at Woodlawn cemetery in Augusta, IL. Visitation will be held from 10:00 am until the time of services Monday at the Hamilton Funeral Home. Memorials can be made to Camden United Methodist Church or Woodlawn Cemetery.

To order memorial trees or send flowers to the family in memory of Gene Kearby, please visit our flower store.