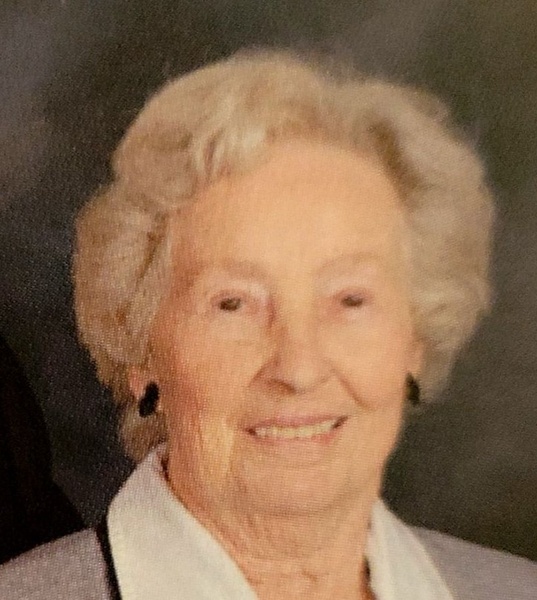 Erma Louise Taylor, age 91, of Timber Point Healthcare, Camp Point, IL passed away on April 19th at the home.
She was born November 8, 1930, in Ellington Township.  She was the daughter of William H. Niekamp and Fredericka Ahlemeier Niekamp. She married Ralph Leroy Taylor on August 20, 1955, in St. Paul United Church of Christ in Fowler, IL by the Rev. Donald Schmidt.  She was baptized on December 7, 1930, at Salem Church and confirmed on March 25, 1945, in Salem Church.  She attended Washington Elementary School in Ellington Township and received her diploma from Quincy Senior High School on June 4, 1948.  She received a school letter in Journalism.
After graduating she worked in the family farming and trucking business for her father in the office of William H. Niekamp & Sons Trucking and Trailer Service.  In 1960 the business was sold to her brother William (Sonny) Niekamp and she continued working for him until she retired in September 1994.  She also worked part-time at her husband’s business Taylor Farm Supply in Camp Point.  She also did some volunteer work after retirement.  Erma was a member of the Camp Point United Methodist Church.
She and her husband always enjoyed traveling to the western states of Rocky Mountain National Park, Colorado Springs, Yellowstone National Park, and Jackson Hole, Wyoming.  She has several scrapbooks to show for her travels.  They also traveled with their longtime friends, Ray and Wilma Yoder of Goshen, Indiana on several trips to California. She and her husband had resided at Timberpoint Healthcare Center since 2016. They were married 65 years until his death in 2020.
Erma is the last of the six siblings.  She was preceded in death by her husband, Ralph who died on December 4, 2020.  Also, her sister, Wilma Mosley, four brothers, Howard, Richard, Leonard (Boots), and William ( Sonny), a niece, Patricia (Mosley) Bange, and a great-niece, Lori Rush.
Surviving is one sister-in-law, Faye Niekamp Orr of Quincy, Il.  Several nieces and nephews including Marsha (Mosley) Rush, Ken Niekamp (Judy), Gary Niekamp (Kathye), Pam Shaffer (Duane), Kathy Thomas (Ken Holtschlag), Judy Krall, Jane Leffers (Floyd), Jeff Niekamp (Anita), Jerel Niekamp (Carolyn), Diana Yaeger (Jerry), David Niekamp (Linda), Susan Herrick (Tom), Connie O'Neal (Mike), Rex Niekamp (Betty), Alan Niekamp (Karen), Dan Niekamp, and Bill Taylor (Cherie); numerous great-nieces and great-nephews; and a great great-nephew.
Mrs. Taylor was cremated. A memorial service will be held Monday (April 25, 2022) at 10:00 a.m. at the Camp Point United Methodist Church by Rev. Sheri Renner. Visitation will be held from 9:00 a.m. until the time of services at the church.
Memorials may be made to the Camp Point United Methodist Church or Chaddock.
Online condolences may be left at www.hamiltonfuneralhomes.net.
The Lummis Hamilton Funeral Home in Camp Point is handling the arrangements.

To order memorial trees or send flowers to the family in memory of Erma L Taylor, please visit our flower store.
Send a Sympathy Card