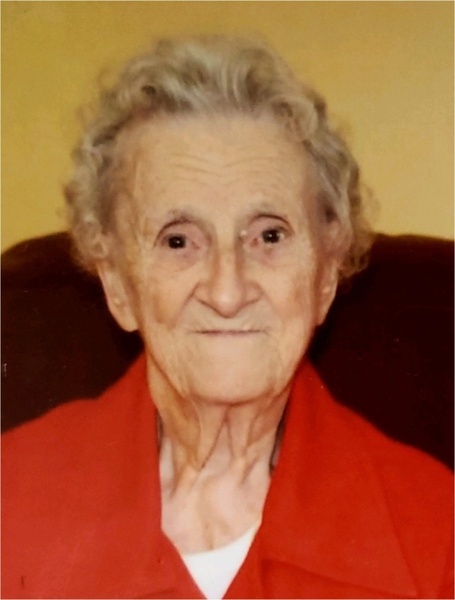 Elda Gronewold, 97, of Golden, Illinois passed peacefully in her home on Monday, November 16, 2020.
Elda was born on November 14, 1923, to the late Louis and Mary (Fredericks) Reuschel in rural Golden, Illinois. She was baptized into the Christian faith on December 16, 1923, and made her confession of faith/confirmed on April 12, 1939, under the direction of Dr. William Braun. Her confirmation verse was Psalms 37:37. "Mark the perfect man, and behold the upright: for the end of that man is peace.: On February 23, 1948, she married Arnold Gronewold in Trinity Lutheran Church-Golden, Illinois. Her husband preceded her in death on March 22, 1989.
She was a member of Immanuel Lutheran Church Golden, Illinois. She was active in the altar guild, quilting circle, adult choir, and taught Sunday School. For many years, she contributed the turkey and homemade angel food cake for the annual ice cream social.
Elda was a loving wife, mother, grandmother, and great grandmother. She was a quiet, humble, private lady with a witty personality. Her greatest joy was working on the family farm with her husband and in her flower/vegetable garden. She was gifted as a seamstress and made many beautiful quilts. Her family enjoyed her musical abilities on piano, harmonica, and her alto voice. With her passing, there is a void that will never be filled.
She will be missed by her children, grandchildren, and great-grandchildren. She is survived by two daughters: Beverly Gronewold of Golden, Illinois, and Leah (George) Benz of Quincy, Illinois; three grandchildren: Andrew (Angie) Benz of Sioux City, Iowa, Valerie (Jay) Wackerly of Pella, Iowa and Jason Benz of Quincy, Illinois; eight great-grandchildren, Zoey, Kayla, Sophey, Amelyia Benz of Sioux City, Iowa and Colby, Liliana, Leo and Dominic Wackerly of Pella, Iowa; one sister: Dorothy Ufkes of Golden, Illinois; two brothers: Ben (Cathy) Reuschel of Quincy, Illinois and Louis Reuschel of Golden, Illinois and many nieces and nephews.
She was preceded in death by four sisters/spouses: Esther Buss (Benhard), Leta Post (Clarence), Mary Haschemeyer (Ernest), Ruth Ideus (Irwin); two brothers/spouse: Henry Reuschel (Arlene), and George Reuschel (Geneva); two sisters-in-law: Isabel Reuschel and Frannie Gronewold; two brothers-in-law: Bert Ufkes and Wilke Gronewold; and several nieces and nephews.
Funeral services will be held Friday morning at 11:00 at Immanuel Lutheran Church in Golden by Rev. Jeff Corson. Burial will follow at Immanuel Lutheran Cemetery, Golden, Illinois. Please bring a mask and adhere to social distancing guidelines if you wish to attend.
Visitation will be held Friday morning from 10:00 until the time of the services at the church. Please bring a mask and adhere to social distancing guidelines if you wish to attend.
Memorials may be made to Immanuel Lutheran Church or Blessing Foundation for Hospice.
Online condolences may be left at www.hamiltonfuneralhomes.net.
The Lummis Hamilton Funeral Home is handling the arrangements.

To order memorial trees or send flowers to the family in memory of Elda Gronewold, please visit our flower store.