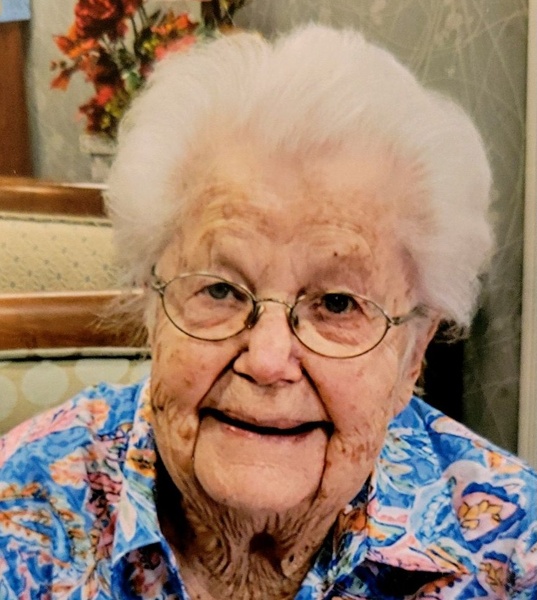 Hildegarde grew up on the family farm in the Golden area. She graduated from Quincy Business College. She worked at Moormans, Montgomery Ward, and JC Penny in downtown Quincy. she started at K-Mart when they opened their store in Quincy and worked in the fabric department until she retired in 1990.

Hildegarde liked to sew. She made most of her daughter's clothing when they were young. Her daughters, granddaughter, and now great-granddaughter have all played Barbie with lots of doll clothes that she made. She made clothes and blankets for their baby dolls as well. After retirement, Hildegarde started quilting and was proud that her daughters, grandchildren, and great-grandchildren all have quilts that she made and quilted for them.

Hildegarde collected cookie cutters--she had several thousand. For her 95th birthday this year, her family cut out cookies with her cutters and decorated them to serve with ice cream instead of having cake.

Hildegarde had a green thumb. For years she had a garden with a large strawberry patch. She gave that up years ago, but her love of flowers, especially geraniums, kept her busy planting, weeding, and watering until she moved to Adams Pointe Assisted Living in Quincy after her husband passed away a year ago.

.Surviving are two daughters, Susan Kay and John Chenoweth of Table Grove, IL., and JoAnn Cannell and Dan Peters of Quincy. In addition, there are three grandchildren and twelve great-grandchildren who survive: Scott Chenoweth and his children, Anna, Evan, Noah, and Simon. Also Scott's fiancee LeighAnn Featheringill and her son, Kaolin. They reside in Indianapolis, Indiana. Sara (Chenoweth) and Ryan Plummer and their son John. They live in Industry, Illinois.  Daron Cannell and his children, Aden, Korbin, and Collin. Also Daron's fiancee Jodi Stodgel and her children Sabrina, Chloe, and Clint. They reside in Mendon. Also, surviving are two sisters; Marilyn Flesner of Golden, Illinois, and Esther Huffendick (Bob) of Quincy. Plus there are many nieces and nephews.

She was preceded in death by her husband, Glen; her grandson, Daniel Cannell; her brothers, William and Harold Schuster; and her sisters, Louise Roman, and Bernice Johnston.

Funeral Services will be conducted at 2:00 p.m. Wednesday, May 18, 2022, at the Lummis-Hamilton Funeral Home in Camp Point by Rev. Tom Graves. Burial will follow at Immanuel Lutheran Cemetery, Golden, Illinois.

Visitation will be held Wednesday from noon until the time of services at the Lummis Hamilton Funeral Home in Camp Point.

Memorials may be made to Blessing Foundation for Hospice or the Quincy Humane Society.

To order memorial trees or send flowers to the family in memory of E. Hildegarde Leerhoff, please visit our flower store.