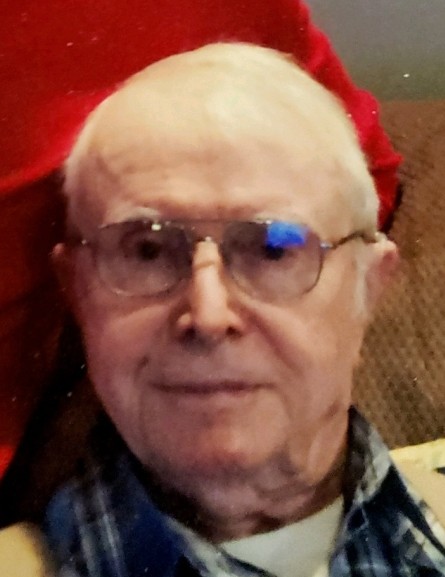 David William Coggeshall, 92, of Golden, died at 10:20 a.m. Monday, September 6, 2021, at Golden Good Shepherd Home.
Born December 9, 1928, in Quincy, David was a son of James Lewis Sr. and Pearl Shields Coggeshall. He married Esther Louise Aden on December 20, 1953, at Trinity Lutheran Church in Golden. She survives.
David was drafted into the U.S. Army and served his country in Korea. He was a community-minded man and had volunteered as an EMT and fireman, served with the Lutheran Mission Builders, worked with Habitat for Humanity, and had been past president and longtime member of the Golden American Legion Post #801. He was a devoted husband, father, grandfather, and friend for life to many.
He had been employed as a machinist and in machine repair at Gardner Denver in Quincy until his retirement. David was a man of many talents and could repair most anything.
Survivors in addition to his wife are two sons, Eric Coggeshall, Denver, CO., and Robin (Claudia) Coggeshall, Camp Point; a daughter, Jeane Church, Golden; eight grandchildren, Adam (Rachel) Coggeshall, Palmyra, MO., Canon Benjamin Coggeshall, St. Louis, MO., Jacob Coggeshall, Chicago,  Caleb Coggeshall, Quincy, Ethan Coggeshall, Independence, MO., Jonah Coggeshall, Camp Point, Lydia (Tom) VanBuskirk, Hills, IA., and Maggie Church, San Carols, CA.; seven great-grandchildren, Jackson, Luke, and Brayden Coggeshall, Tiffany Higgins, Emily Foy, and Adeline and Cecilia VanBuskirk; a sister, Frances (Harry) Vonholt, Clayton; and several nieces and nephews.
He was preceded in death by his parents; a brother, James Lewis Coggeshall, Jr., and a sister, Mary Margaret Coggeshall.
Funeral Services will be held Friday morning at 11:00 a.m. at Trinity Lutheran Church in Golden by Rev. Tom Graves. Burial with military honors will follow at Golden Memorial Gardens.
Visitation will be held Thursday evening from 4:00 p.m. until 7:00 p.m. at Trinity Lutheran Church in Golden.

Memorials may be made to Trinity Lutheran Church or Blessing Hospice.

To order memorial trees or send flowers to the family in memory of David Coggeshall, please visit our flower store.
Send a Sympathy Card