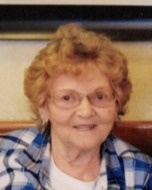 She was preceded in death by 2 sons in infancy, 5 brothers and 1 sister.

A graveside service will be held at 2:00 pm Sunday October 2, 2022 at Woodlawn cemetery in Augusta, IL. Visitation will be held one hour prior to the time of the service at the Hamilton Funeral Home in Augusta, IL. Memorial contributions may be made to the Disabled American Veterans Fund.

To order memorial trees or send flowers to the family in memory of Lena Estella Farwell, please visit our flower store.